You need a quick-relief drug when you're coughing, wheezing, having trouble breathing, or otherwise having an asthma episode (asthma attack). These drugs work very fast to control asthma symptoms. They are also referred to as "rescue" drugs. 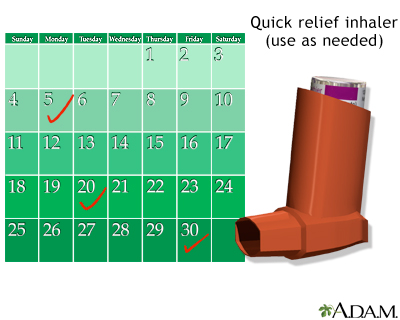 Here are the main types:

The short acting beta-agonists are the most effective and most widely used drugs for treating asthma attacks. They also can be used just before exercising to help prevent exercise-induced symptoms. They work by relaxing the muscles that tighten around the bronchial tubes during an attack. (The drug is a "bronchodilator.")

If you find that you are increasingly relying on these drugs or using more than one canister a month, your asthma probably is not under control, and your daily control drugs should be evaluated.

Albuterol is the most commonly used short-acting beta-agonist and is the ingredient in Accuneb, Alupent, ProAir, Proventil, and Ventolin. A purer form of albuterol, called levalbuterol, is now available (Xopenex), and appears to require lower doses with longer action. Early studies of levalbuterol showed some benefits in terms of lower side effects, but later trials did not. Levalbuterol is delivered with a nebulizer or an HFA (CFC-free) MDI. Maxair (pirbuterol) is another example of a short-acting beta-agonist. IMPORTANT NOTE: Short-acting beta agonists are NOT formulated the same as "long-acting" beta agonists, which may be used in the daily control of asthma.

This drug, which is also a bronchodilator, is often the next choice for quick relief and is given to people who do not tolerate beta-agonists. It is also used for people whose asthma is triggered by beta-blocker medication for the heart.

Ipratropium bromide, such as Atrovent, takes longer to act than beta-agonists and is not used to prevent exercise-induced asthma. Other brands, Combivent and DuoNeb, contain both ipratropium bromide and albuterol.

Steroids are sometimes given orally (as pills, capsules, or liquids) for 3 - 10 days to help control moderate-to-severe asthma attacks. They take longer to act, but help prevent additional attacks.