Chronic obstructive pulmonary disease (COPD) refers to chronic lung disorders that result in blocked air flow in the lungs. The two main COPD disorders are emphysema and chronic bronchitis, the most common causes of respiratory failure. Both result from damage to the lungs over many years and predominantly affect former and current smokers. Emphysema occurs when the walls between the lung's air sacs become weakened and collapse. Chronic bronchitis occurs when the airways in the lungs become swollen and partially clogged with mucus. Chronic bronchitis may also involve muscle spasms in the airways. Many people with COPD have both emphysema and chronic bronchitis. 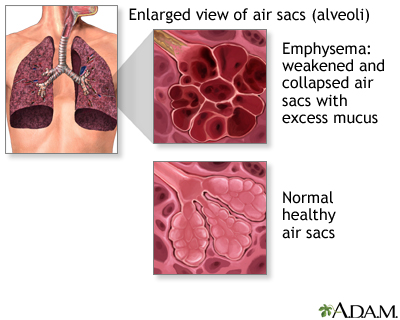 According to the American Lung Association, COPD is the fourth leading cause of death in the United States, with over 11 million Americans diagnosed with it (and probably at least that many who have it and are not diagnosed), and over 120,000 Americans dying from it annually (beginning in 2002, more women than men). Asthma and COPD are considered different medical problems. Patients with COPD may also wheeze. The damage to the airways from COPD usually is more permanent and irreversible. 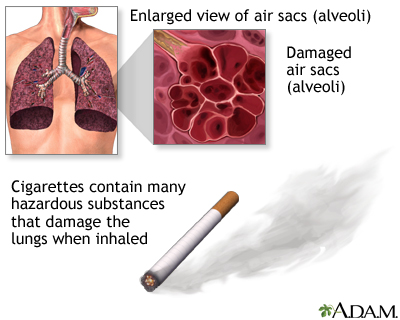 What are the symptoms?

COPD is often diagnosed in the doctor's office when patients complain of difficulty breathing while doing everyday tasks or complain of a persistent cough. COPD patients often cough up thick or bloody mucus, and their skin may have a bluish tinge caused by lack of oxygen in the blood. If patients develop severe shortness of breath or swelling of the legs or ankles, they require immediate attention, as these symptoms may signify congestive heart failure.

How does a doctor make a diagnosis of COPD?

Although a definite diagnosis of COPD can be difficult, doctors rely on certain assessment procedures to help them diagnose the condition. Your doctor may:

How is COPD treated?

Although the damage caused by emphysema is irreversible, some of the effects of chronic bronchitis can be partially improved. The progression of COPD and the severity of the symptoms might be managed through the following methods: