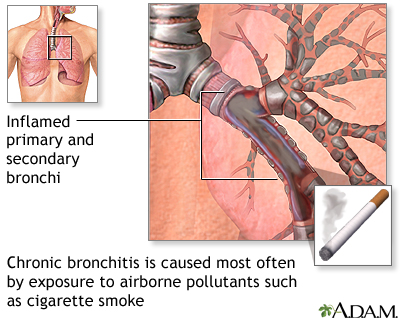 What are the symptoms of chronic bronchitis?

Symptoms may not be immediately obvious for chronic bronchitis. They include:

Chronic bronchitis is caused most often by exposure to airborne pollutants such as cigarette smoke, excessive dust in the air, or chemicals. The constant exposure to such pollutants begins to cause damage in the bronchioles (the smaller airways in the lungs), as the bronchial lining becomes inflamed.

How is chronic bronchitis treated?

The main way to treat chronic bronchitis is to avoid the irritant that is causing the illness. For allergy-induced bronchitis, this means removing the allergens from the home or work environment. For smokers, this means quitting smoking.

To treat the bronchitis symptoms, increase the humidity in the air to ease the dry, scratchy throat. Try taking a cough suppressant at night to enable a good night's sleep. Keep in mind that the use of cough suppressants often is discouraged during the day to allow the body to cough out the mucus. Allergic bronchitis may be treated with antihistamine medications to reduce the allergic reaction.

Prescription medications may also help. Bronchodilators can help to open the airways, and steroid drugs can help to reduce the inflammation in the bronchioles. For severe or very long-term cases, doctors may prescribe oxygen therapy to allow proper oxygenation throughout the body.