Gout is a disease involving uric acid deposits in the joints. The disorder causes pain, especially in the joints of the feet and legs.

Gout is caused by an overproduction of uric acid or a reduced ability of the kidney to eliminate uric acid. The exact cause is unknown. It is more common in males, postmenopausal women, and people with high blood pressure. Heavy alcohol use, diabetes, obesity, sickle cell anemia, and kidney disease also increases the risk. 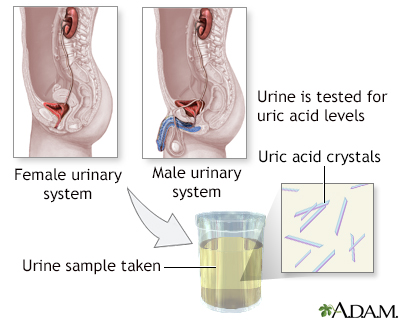 The condition may also develop in people who take drugs that interfere with uric acid excretion.

The symptoms come on suddenly, usually involving only one or a few joints. The pain frequently starts during the night and is often described as throbbing, crushing, or excruciating. The affected joints show signs of warmth, redness, and tenderness. The pain tends to subside within several days.

If several attacks of gout occur each year, this may cause joint deformity and limited motion in affected joints. Uric acid deposits called tophi develop in cartilage tissue, tendons, and soft tissues. These tophi usually develop only after a patient has suffered from the disease for many years. Deposits also can occur in the kidneys, leading to chronic kidney failure.

Chronic gouty arthritis is treated either with drugs like probenecid, which reduce uric acid levels by enhancing its removal in the urine, or with drugs like allopurinol, which block the enzyme that produces uric acid. Patients should drink plenty of water or other fluids to decrease the risk of kidney complications.

Colchicine can be added to prevent further acute attacks. This drug can be discontinued when uric acid levels are stable (usually after 3 months), but it can also be continued at low doses to help prevent further attacks.