If you are still having symptoms despite your efforts to avoid allergens, you might explore medication options. Regardless of which medications you select, read the product labels and know the side effects. The following list includes the most common allergy treatments (both over-the-counter and prescription) and the specific allergic conditions they treat. Particularly when treating children for allergies, it is wise to consult with your health care provider. Some of the medications are not as effective in children, and some of the medications can affect behavior and sleep, as well as cause more serious side effects. 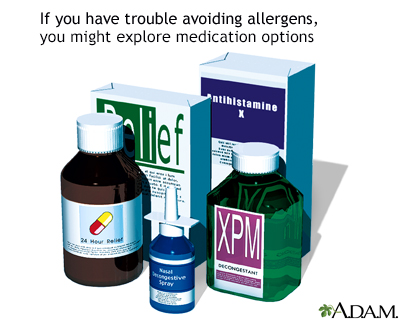 Antihistamines -- As the name implies, antihistamines counter the effects of histamine released during an allergic reaction. They are widely used to treat many allergy-related conditions. They are often combined with decongestants and are available in a variety of over-the-counter formulas (such as Advil Allergy Sinus, Alavert Allergy & Sinus, Benadryl, Chlor-Trimeton, Claritin, Contac, Dimetapp, Robitussin Cough & Allergy, Triaminic Cold and Allergy, and Tylenol Allergy). These medicines may cause drowsiness. Non-drowsy decongestant medicines are also available (such as Claritin, Allegra, and Zyrtec). You can also get prescription decongestants (such as Clarinex and Xyzal). You should always ask your pharmacist if your antihistamine also contains a decongestant, especially any you give to children. Some antihistamines may cause drowsiness and slowed reaction time. Others do not. Antihistamine nasal sprays are also available to treat allergic rhinitis (such as Astelin and Astepro). Antihistamine eye drops may also be used for quick relief of itchy eyes associated with allergies (such as Patanol and Pataday).

Leukotriene blockers -- Leukotrienes are another substance released in the body that trigger allergic symptoms such as a stuffy or runny nose, sneezing, itchy eyes, postnasal drip, or wheezing. Montelukast sodium (Singulair) is a prescription medicine that can prevent symptoms by blocking leukotrienes. It is used in adults and in children as young as 2 years. It is also used to treat asthma.

Decongestants -- People who experience nasal congestion (stuffy nose) due to allergies or sinusitis sometimes consider oral or nasal spray decongestants for relief. Decongestants are also included in eye drops to decrease redness caused by conjunctivitis. They work by constricting blood vessels and reducing swelling. Be careful when using some nasal spray decongestants. If you use them for a prolonged period (longer than 3 - 4 days), you may experience a "rebound" effect, where nasal congestion symptoms return. Concerns have been raised about oral decongestants and their side effects (especially for children) and potential for misuse. They are now available behind the counter. Ask your pharmacist; you should ask your child's pediatrician about decongestant use in children.

Cromolyn Sodium/Nedocromil Sodium -- These are another type of anti-inflammatory medication. Cromolyn sodium nasal spray can be used to treat and sometimes prevent allergic rhinitis. It works by preventing the release of histamine from mast cells. Cromolyn nasal spray is available over the counter and is gentle, but it is usually not as effective as corticosteroids or anti-histamines. It generally takes a few days to start working. Eye drop versions are available for itchy, bloodshot eyes. Inhaled nedocromil sodium is used to treat inflammation due to asthma, which can be exacerbated by allergies. It is more often used in children.

Epinephrine -- Epinephrine (adrenalin) is used for emergency treatment in cases of anaphylaxis due to insect sting, food, or drug allergies. It is most commonly administered with a device called an injectable epinephrine kit (such as EpiPen or Twinject). Epinephrine constricts the small blood vessels in the skin and mucous membranes, which increases blood pressure and heart rate back to normal levels. Epinephrine also is an antihistamine.