Each year, millions of Americans suffer from one or more episodes of the common cold, flu (influenza), allergic rhinitis, and sinusitis. All of these conditions have one thing in common -- they all produce respiratory problems. Since the symptoms of these conditions are all very similar, they often are confused with each other. (See comparison chart.)

Symptoms of the common cold usually begin 2 - 3 days after infection and often include nasal discharge, obstruction of nasal breathing, swelling of the sinus membranes, sneezing, sore throat, cough, and headache. Fever is usually slight but can climb to 102° F in infants and young children.

Cold symptoms (which are caused by viruses) can last from 2 - 14 days, but two-thirds of people recover in a week. If symptoms occur often or last much longer than 2 weeks, they may be the result of an allergy rather than a cold.

Colds occasionally can lead to secondary bacterial infections of the middle ear or sinuses, requiring treatment with antibiotics. High fever, significantly swollen glands, severe facial pain in the sinuses, and a cough that produces mucus, may indicate a complication or more serious illness requiring a doctor's attention.

People understandably often confuse an allergy with a cold or flu. Remember colds are short-lived and passed from person to person, whereas allergies are immune system reactions to normally harmless substances. Allergy symptoms include: 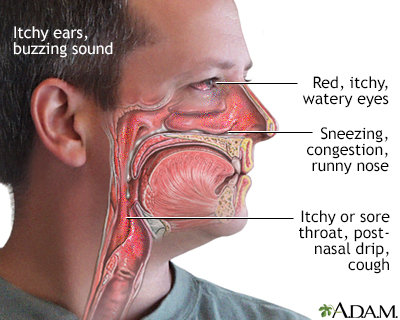 The flu usually begins with a fever over 102° F, a flushed face, body aches, and lack of energy. Some people have other symptoms such as dizziness or vomiting. The fever usually lasts for a day or two, but can last 5 days.

The most prominent of the respiratory symptoms is usually a dry, hacking cough. Most people also develop a sore throat and a headache. Nasal discharge and sneezing are not uncommon. These symptoms (except the cough) usually disappear within 4 - 7 days. Sometimes there is a second wave of fever at this time. The cough and tiredness usually lasts for weeks after the rest of the illness is over.

Usually, doctors diagnose flu on the basis of whether flu is epidemic in the community and whether the patient's complaints fit the current pattern of symptoms. Doctors rarely use laboratory testing to identify the virus.

The classic symptoms of acute sinusitis are nasal congestion, greenish nasal discharge, facial or dental pain, eye pain, headache, and a nighttime cough. Some patients also complain of fever, malaise (feeling ill), bad breath, and a sore throat. It is usually preceded by a cold, which does not improve or worsens after 5 - 7 days of symptoms.

Chronic sinusitis is subtler, and can be difficult to diagnose. It manifests the symptoms listed above in a milder form, but usually persists for longer than 8 weeks. It is most common in patients with allergies. 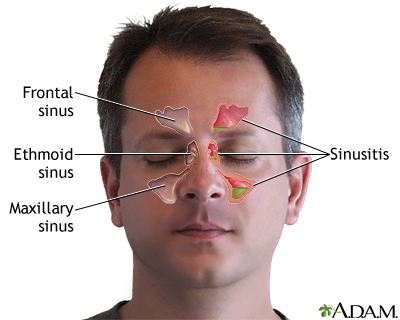