Hay fever (allergic rhinitis) involves an allergic reaction to pollen. A virtually identical reaction occurs with allergy to mold, animal dander, dust, and similar inhaled allergens. The pollens that cause hay fever vary from person to person and from region to region. Pollens that are carried by bees from plant to plant are seldom responsible for hay fever because the grains are large and have a waxy coating. Tiny, hard-to-see pollens carried by the wind are more often the cause of hay fever. 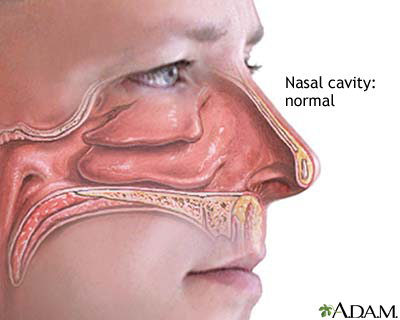 Examples of plants commonly responsible for hay fever include:

In addition to individual sensitivity and geographic differences in local plant populations, the amount of pollen in the air can be a factor in whether hay fever symptoms develop. Hot, dry, windy days are more likely to have increased amounts of pollen in the air than cool, damp, rainy days where pollen is washed to the ground.

When an allergen such as pollen or dust is inhaled by a person with a sensitized immune system, it triggers antibody production; these antibodies bind to cells that contain histamine. Histamine (and other chemicals) are released by these cells when the antibodies are stimulated by allergens. This causes itching, swelling of affected tissues, mucus production, muscle spasms, hives, rashes, and other symptoms. Symptoms vary in severity from person to person.

The patient's history is important in diagnosing hay fever, including whether the symptoms vary according to time of day, the season, exposure to pets, diet changes, or other sources of potential allergens.

Skin testing is the most common method of allergy testing. This may include scratch, prick, or intradermal tests. Occasionally, the suspected allergen is dissolved and dropped onto the lower eyelid (conjunctiva) of the eye as a means of testing for allergies.

There are specific blood tests that can be used to diagnose hay fever, but they are less helpful than skin tests.

The best "treatment" is to avoid what causes your allergies in the first place. It may be impossible to completely avoid everything you are allergic to, but you can often take steps to reduce your exposure.

Medication options include the following:

Allergy shots (immunotherapy) are occasionally recommended if the allergen cannot be avoided and symptoms are hard to control with medication. It includes injections once or twice a week of the allergen, given in increasing doses (each dose is slightly larger than the previous one) that may help the body adjust to the antigen. Allergy shots demand a significant time commitment. It can take 6 - 8 months to reach the most effective (monthly) "maintenance dose," depending on how well the buildup to that does is tolerated in the patient over time.

Symptoms may sometimes be prevented by avoiding known allergens. Most trees produce pollen in the spring, grasses usually produce pollen during the summer, and ragweed and other late-blooming plants produce pollen during late summer and early autumn. During the pollen-producing times (pollen season), people with hay fever may prefer to remain indoors in an air conditioned-atmosphere whenever possible. For people that are sensitive to certain indoor allergens, dust mite covers for mattresses and pillowcases are recommended, as well as avoidance of culprit pets or other triggers.