Contact with poison ivy is one of the most frequent causes of skin rash in children during the spring, summer, and fall seasons. The resins of these plants, called urushiol, cause an allergic reaction in more than 50% of the population. Exposure to the smoke of these burning plants can cause the same reaction. 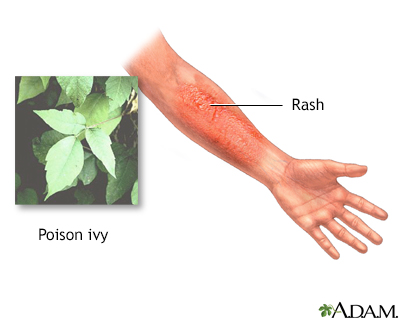 Poison ivy can be found in every region of the United States except the Southwest, Alaska, and Hawaii. It appears as a weed with three shiny green leaves and a red stem. The plant grows in the form of a vine, often along riverbanks.

Poison oak is primarily found on the West Coast. It grows in the form of a shrub and has three leaves similar to poison ivy.

Poison sumac grows abundantly along the Mississippi River, but is far less common in other regions. It grows as a shrub. Each stem contains 7 - 13 leaves arranged in pairs. 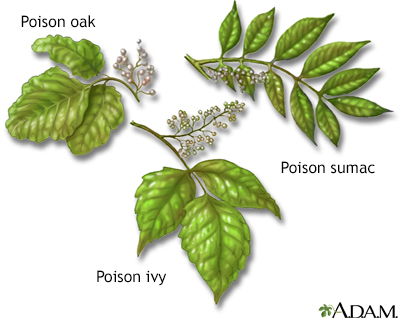 Dermatitis is caused by a sensitivity to the resin of these plants. The rash is spread by the oils touching various parts of the body. It is not spread by the fluid of the blisters it creates, thus it is not contagious unless the resin remains on the skin and is touched by another person.

However, the oily resin usually enters the skin rapidly, and is seldom transferred person to person. Conversely, the resin may persist for long periods on contaminated clothing, pets, tools, etc., and sensitive individuals can easily develop the rash from delayed contact with contaminated items.

This is a true allergy. Most people will have no reaction the first time they are exposed. In fact, children under the age of 7 are rarely sensitive. Sensitivity is particularly rare under the age of one, and when infants do break out, the rash is usually mild.

Symptoms do not appear immediately. You will notice them within 2 days of exposure, and rarely as late as 2 weeks later. Reactions can vary from mild in some individuals to very severe in highly sensitive individuals. Hospitalization is sometimes required.

Call your physician if...