Hives are raised red welts of various size on the surface of the skin, often itchy, which come and go. Hives are also called urticaria.

They are very common, especially in people who have experienced other allergic reactions, including hay fever and angioedema. The welts occur on the surface of the skin, usually in batches. Release of histamine and other chemicals into the bloodstream, associated with the allergic response, causes the itching, localized swelling, and other symptoms. 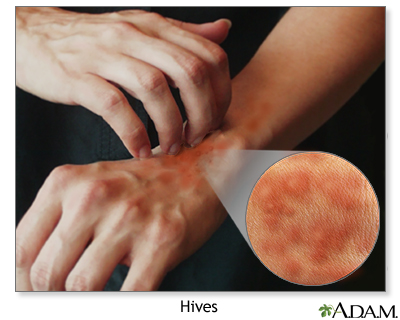 Many substances, called allergens, can trigger an allergic response resulting in hives. Common allergens include:

Hives may also develop after infections or illness (including autoimmune diseases, leukemia, and others). There seems to be a hereditary tendency toward the development of hives. Some less common causes of hives include:

The diagnosis is primarily based on the appearance of the skin, and is confirmed by a history of exposure to an allergen. Occasionally, skin or blood tests may be performed. Many people with so-called chronic idiopathic urticaria have no proven allergic trigger and no clear cause for the hives.

Hives in the throat may obstruct the airway, so any swelling in the throat or difficulty breathing with hives are emergency symptoms. Call your local emergency medical services or visit the emergency room immediately.

Treatment may not be needed if hives are mild, and they may disappear spontaneously. The following medications may reduce the inflammation, itching, and swelling:

Cool compresses or soaks to the area may reduce swelling and pain. Avoid irritation of the area, and don't wear tight clothing (which may trigger a new outbreak). Avoid known allergens to prevent recurrence of hives. Hives may be uncomfortable, but they generally are harmless and disappear on their own. In most cases, the exact cause of hives can not be identified.

Call your health care provider or go to the emergency room if there is difficulty breathing, wheezing, or if fainting occurs.