Drug allergies occur when your immune system recognizes a drug as a foreign substance and tries to protect you from it. Overall, drug allergies are uncommon; most people go through life without ever having an allergic reaction to a drug. However, people who have asthma or other allergies, or people whose parents have drug allergies, are more likely to have a drug allergy. 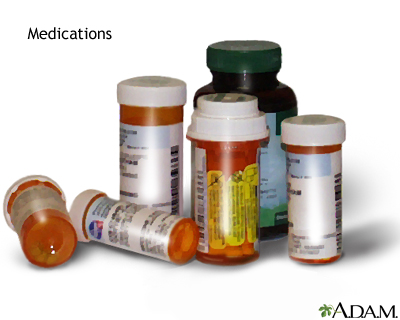 What drugs cause allergies?

Although any drug can cause an allergic reaction, antibiotics are the most common source of drug-related allergies. The list below includes examples of drugs that have an increased risk of causing allergic reactions.

What are the symptoms of a drug allergy?

The most common symptoms are itching, redness, swelling of the skin, welts, and a runny nose. Symptoms of a drug allergy can occur fairly quickly, possibly within minutes of taking the first dose, or they can begin several days after taking the drug. About half of all allergic reactions occur one week after starting the drug. Most symptoms should disappear in 3 - 5 days after stopping the drug. Ask your doctor if you can treat the symptoms mentioned above with an allergy medication, such as an antihistamine (Benadryl or Chlortrimeton).

You also should be aware of a rare, but potentially life-threatening reaction to a drug allergy. Anaphylaxis, a severe reaction that usually occurs immediately after taking a drug, can cause difficulty breathing, increased heart rate, and decreased blood pressure. If you think that are developing symptoms of a drug allergy, stop taking the drug. There is an increased chance of anaphylaxis with repeated exposure to the drug (the more doses you take). If you suspect anaphylaxis, seek medical help immediately. An anaphylactic reaction can be fatal.

What's the difference between an allergic reaction and a side effect?

Like most allergies, a drug allergy is caused by an over-sensitive immune system. People with drug allergies have an immune system that attacks the drug as if it were a harmful substance, leading to hives, itching, and other allergic symptoms.

In contrast, most drug "side effects" are not related to the immune system -- they are caused by a drug's general effect on various organs throughout the body. For example, a nasal decongestant works because it constricts the capillaries in your nose, which reduces nasal swelling and opens the airway. But an unwanted side effect is that it ALSO constricts the capillaries throughout your body, which may lead to an increased heart rate, headaches, and dizziness. A decongestant is not specific enough to one part of the body or one single action -- so just about anyone can experience these side effects. This has nothing to do with whether the person has an immune system that is sensitive to the drug.

How can I avoid drug allergies?

If you discover that you have a drug allergy, make sure you remember what it is, and always tell your doctor or pharmacist about it. This will help them determine which medications you should receive in the future. For example, if you are allergic to amoxil, which is a penicillin class drug, you probably are also allergic to ampicillin, another drug in the penicillin class. If you need to take a medicine that you are allergic to, however, an allergist in a medical facility may be able to "de-sensitize" you.