Asthma is an inflammatory disorder of the airways, characterized by periodic attacks of wheezing, shortness of breath, chest tightness, and coughing.

Three things make it harder to breathe during an asthma attack -- the inflammation (swelling) of the lining of the airways, the tightening of the muscles around the airways, and fluid/mucus filling the airways. These factors reduce airflow and produce the characteristic wheezing sound. 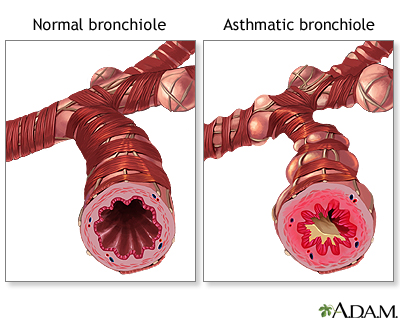 Most people with asthma have periodic wheezing attacks separated by symptom-free periods. Some people have chronic shortness of breath with episodes where it gets worse. In other cases, cough is the predominant symptom. Asthma attacks can last minutes to days, and can become dangerous if the airflow becomes severely restricted.

Asthma symptoms can decrease over time, especially in children.

The doctor will conduct a physical exam that focuses on the upper respiratory tract, chest, and skin. The doctor will listen for wheezing and may look for nasal secretions, eczema, and similar allergy-related symptoms.

The most important test for diagnosing asthma is called spirometry. A spirometer is an instrument that measures the maximum flow rate you can exhale after breathing in as much as you can. A drug called a bronchodilator is given to the patient to see whether breathing obstruction is "reversible." If so, this is a strong indication of asthma.

No one single test, or set of tests, is appropriate for every patient. Your doctor may use other tests to help rule out the possibility of other causes of your symptoms.

Treatment is aimed at avoiding known allergens and respiratory irritants and controlling symptoms and airway inflammation through medication. Allergens can sometimes be identified by noting which substances cause an allergic reaction.

A variety of medications for treatment of asthma are available. These include:

People with mild asthma (infrequent attacks) may use quick-relief inhalers as needed. Those with significant asthma (symptoms occurring more than twice per week) should take anti-inflammatory medications on a regular basis for long-term control. A severe asthma attack requires a medical evaluation and may require hospitalization, oxygen, and intravenous medications.

A peak flow meter, a simple device to measure lung volume, can be used at home daily to check on lung functions. This often helps determine when medication is needed or can be tapered in the case of an exacerbation of symptoms. Peak flow values of 50 - 80% of an individual's personal best indicate a moderate asthma exacerbation, while values below 50% indicate a severe exacerbation.

If a person is allergic to an animal that cannot be removed from the home, the animal should be kept out of the patient's bedroom. Filtering material can be placed over the heating outlets to trap animal dander. Exposure to cigarette smoke, air pollution, industrial dusts, and irritating fumes should also be avoided.

Allergy desensitization (allergy shots) may be helpful in reducing asthma symptoms and medication use, but the size of the benefit compared to other treatments is not known.