An "insufficient" cervix is a weakened cervix that predisposes a woman to mid-term miscarriage or early (premature) delivery. This has also been called cervical incompetence. 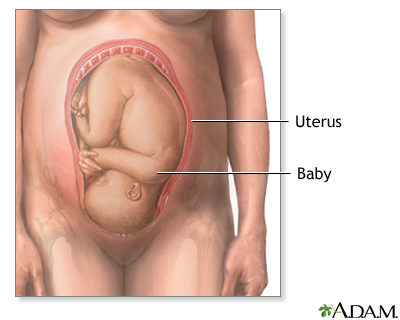 The cervix is the narrow point at the base of the uterus. In a healthy pregnancy, the cervix begins to dilate or open at the very end of pregnancy, before labor begins. When the cervix has been weakened, it may open too early in the pregnancy, threatening miscarriage or early (premature) delivery.

The exact cause of an insufficient or weakened cervix is unknown. It is sometimes associated with a previous traumatic birth (during which the cervix was torn), a cone biopsy, pregnancy with multiple gestations (twins, triplets), or repeated late-term abortion. It is also associated with an abnormally developed cervix.

How Do I Know I Have It?

If you have a history of miscarriages in the second trimester or other indicators of an insufficient cervix, talk to your doctor about your cervical health. You should also let your doctor know if you have had a surgical procedure on your cervix, such as a cone biopsy.

If your doctor suspects an insufficient cervix, he or she may suggest an ultrasound to examine the thickness of your cervical tissue. The ultrasound may be performed when you are planning a pregnancy or are in the early stages of a pregnancy. A hysterosalpingogram, or HSG, may also help determine the appearance of the cervical canal in a nonpregnant state.

How Can I Treat It? 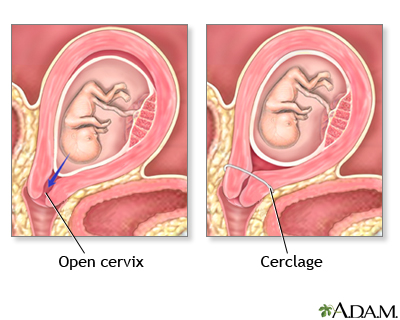 If you have a history of cervical insufficiency, or if your cervix appears short on an ultrasound, you may be offered a cerclage. A cerclage is a surgical procedure that involves stitching the cervix closed with a strong thread for the full-term of the pregnancy. After having a cerclage, a woman is usually prescribed medication to prevent a surgery-related miscarriage. The stitches are removed around the ninth month of pregnancy, or sooner if labor commences, to prepare for delivery.

Cerclages seem to work well – 70 to 90 percent of women who have a cerclage deliver a viable baby.

Many women with short cervices opt not to have surgery, and still deliver healthy babies. Sometimes, doctors may offer a drug called progesterone. There are no good studies to show which women, if any, really benefit from cerclage. Be sure you talk to your doctor in detail about the risks and benefits of surgical and medical options before making your decision.

Q: Will I have to worry about cervical insufficiency in my next pregnancy?

A: Yes. Generally, a woman who has this condition will need to take precautions in subsequent pregnancies.