The Apgar score is a screening test used to measure the vital signs of a baby at birth. 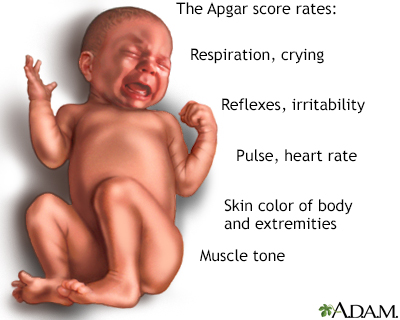 At one and five minutes after your baby is born, the attending health care provider will assess five vital areas of newborn health. The Apgar score uses measures of 0, 1, or 2 for each category, with the best possible total score equaling 10.

A score of seven to 10 is normal and indicates your newborn is in good condition. A score of 10 is very unusual. Almost all newborns lose one point for blue hands and feet.

Any score less than seven indicates your baby needs assistance making the transition to life outside the womb. Health-care personnel should take appropriate action, for example, helping the infant breathe. The Apgar score may be repeated at 10 minutes and later to assess the effectiveness of the intervention or treatment.

Q: Does the Apgar score predict the future health of my baby?

Q: Does my child's Apgar score predict how smart he will be?

A: Apgar scores assess the health and well-being of an infant at birth. They do not predict a child's ability to perform well academically.

A: The Apgar score was originally named after its creator, Virginia Apgar, M.D. After the Apgar score became standard, the categories were renamed to form the acronym APGAR: